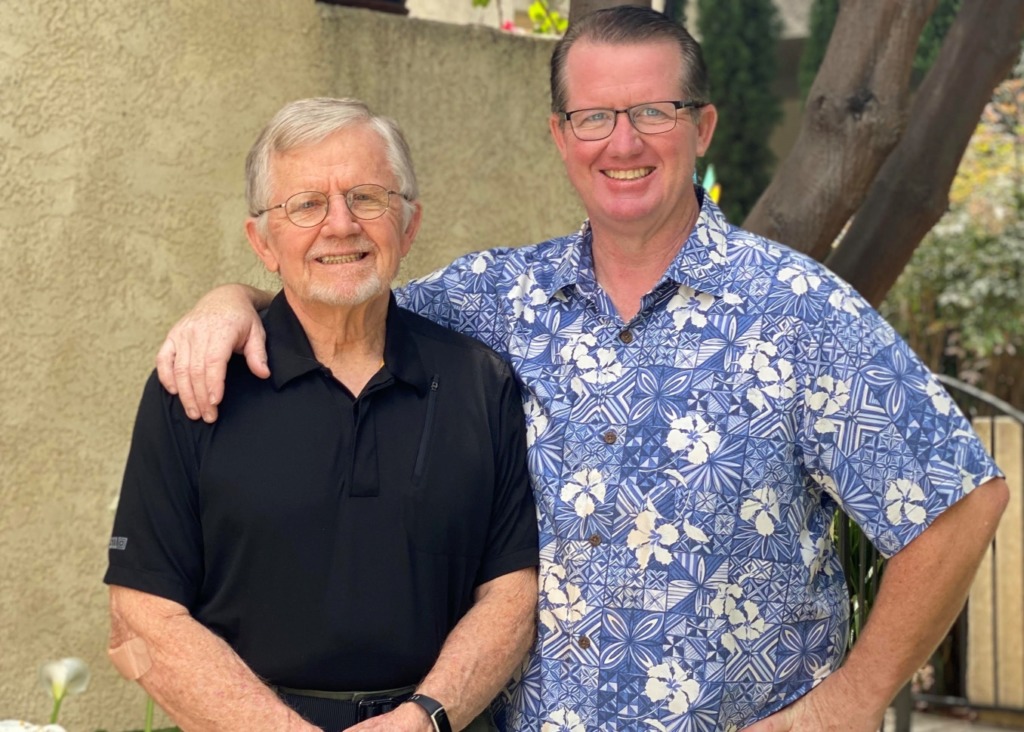 The guy who convinced Scott Baker to train for a marathon jokes that he saved Scott’s life. Scott credits his father – and Hoag.

“I knew people who had different procedures for prostate cancer, and I didn’t want those outcomes. Quality of life is worth something, too,” said Douglas, 78, who splits his time between Long Beach and Montana. “Finally, when I went to Dr. Yoshida, he understood my concerns. He was very knowledgeable and had many years of experience.” Dr. Yoshida is fellowship trained in urologic oncology and has performed over 3,000 robotic-assisted surgeries.

Douglas’ prostate cancer was found to be the slow growing subtype, which did not require active treatment. Dr. Yoshida recommended Douglas be closely followed by Hoag’s prostate cancer active surveillance program, which involves ongoing testing, imaging, as well as lifestyle modification including enhanced diet and exercise. For 10 years, the active hiker and cyclist was able to keep his cancer from growing, under active surveillance at Hoag. An unlikely event happened however, as testing revealed Douglas’ cancer had begun to progress. Dr. Yoshida immediately noticed and scheduled a minimally invasive robotic-assisted surgery to remove his prostate and surrounding lymph nodes. Douglas rapidly recovered without any side effects. His fear about an altered quality of life because of prostate cancer treatment was alleviated. The care Douglas received left not only a lasting impression on him, but also his family.

Douglas’s son Douglas “Scott” Baker, Jr. visited him at Hoag during his two-night recovery stay. At the time, Scott didn’t know that he’d be back on the same floor, with the same set of doctors, treating him for kidney cancer.

A lifelong athlete, Scott began training for the Los Angeles Marathon in September. By December, he was running 30 to 40 miles a week. Extreme exercise can sometimes lead to blood in the urine, so when Scott noticed blood after a long run in January, he didn’t think much of it. Still, with his father’s history and recent surgery, he decided to see his primary care physician, David Shen, M.D., in Long Beach.

“I found out on a Thursday about the tumor, and the following Tuesday, I was getting a CT scan with Dr. Bassett. He got the results that day and scheduled a surgery for two weeks later,” he said. “In about a three-week span, I went from being in the best shape I’ve ever been in to not knowing if I was going to die.”

The diagnosis hit the then-48-year-old father of two hard. He had lost a friend to cancer the previous year.

“It was like a kick to the stomach,” he said of the diagnosis. “Every emotion you could think of is running through your head. But Dr. Bassett told me to be positive. He said, ‘Let’s get it removed.”

Scott was impressed by Dr. Bassett’s attention and dedication.

“The first morning that I went to see him, he got me in for a CT scan right away and got the results that day. He called me on the phone that night, after looking at the scan, and said he was working with his surgical staff to find me the fastest opening. It helped my mindset so much, that he went the extra mile,” Scott said. “He gave me his cell number and said if there is something important, to give him a call. That was really nice. You don’t get that a lot.”

Scott said the care he received from Dr. Bassett echoed the care his father had been getting from Dr. Yoshida. Scott had long been impressed by the way Dr. Yoshida seemed to go out of his way to accommodate Douglas’s travel schedule, making sure an appointment time was available whenever Douglas was in town from Montana.

A month after Douglas’s surgery, Scott underwent a minimally invasive surgery to remove his cancerous kidney. During the surgery, Dr. Bassett also tested Scott’s lymph nodes for kidney cancer. Scott knew Dr. Bassett was going to do this, but what he didn’t know was that this was an extra step done to ensure Scott would be eligible for clinical trial enrollment after surgery. Like his father, Scott spent a few nights at Hoag recovering.

“When I went to see Scotty, I walked right by the room that I had stayed in,” Douglas said. “It was harder [on me that he was sick]. I was just hoping he’d be alright.”

Scott said he is grateful that he and his father were treated by the same team of doctors and nurses, whom he described as “phenomenal.”

“All the nurses and doctors there are great. I tell everybody I know that if they have a problem, to go to Hoag,” Scott said.

After the surgery, Dr. Bassett referred Scott to Hoag’s Hereditary Cancer Program who determined that Scott’s cancer was not hereditary, and therefore his other family members were not at risk. Scott was also enrolled in a clinical trial to ensure his cancer does not return. As for the blood in Scott’s urine, were it not for his father’s recent cancer surgery and his doctors’ diligence, it’s unclear that his cancer would have been detected.

“It was pure luck. The guy who got me to sign up for the marathon takes credit for saving my life,” he laughed. “I’m lucky that my doctors are the kind of people who go the extra step. With Dr. Bassett, he was able to look at my situation through my eyes and helped me understand everything and keep optimistic.”

After six weeks, Scott was well enough to begin running and swimming again.

“I’m not in as good of shape as I was in January, but physically, you wouldn’t know that I lost a kidney,” he said. “I feel great.”