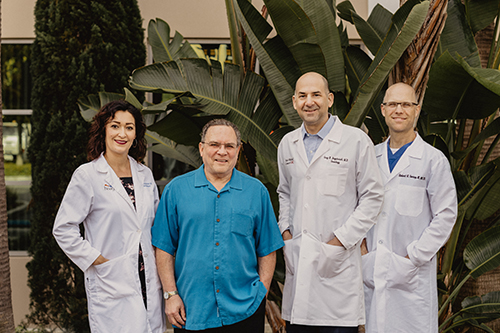 Chuck Gibney had always enjoyed an active, on-the-go lifestyle – and 2017 was no different. He and Ramona, his wife of 52 years, had planned a trip to Yosemite National Park along with a getaway to Oregon, where they’d watch the first total solar eclipse touch the continental U.S. since 1979.

That was until one day early that year when Chuck, 73, went to the bathroom and saw blood in his urine. His urologist scheduled a number of tests and the results revealed a tumor in Chuck’s bladder. The urologist suggested he have his bladder removed.

Taking his doctor’s advice, Chuck researched for a surgeon and oncologist, but he wasn’t sure which hospital to trust for his bladder cancer treatment. Fourteen years ago, during surgery for prostate cancer, surgeons used the da Vinci Surgical System, a robotic design facilitating complex surgery using a minimally-invasive approach.

While the surgery was successful and Chuck thought highly of his medical team, the hospital where he received his care was far from his home in Lake Forest. Knowing his upcoming operation for bladder cancer would be complex and require frequent follow-up appointments, subsequent treatments with chemotherapy and radiation, he wanted to find a hospital closer to the family’s home.

The answer appeared on television.

A compelling commercial discussed how one of the “Best Hospitals in America” — located right here in Orange County — provided the highest-quality health care anywhere.

The hospital was Hoag.

Chuck was intrigued by the commercial and Hoag’s seemingly unsurpassed capabilities. But he wasn’t convinced just yet. Every few days, he would drive by Hoag’s locations in Newport Beach and Irvine. With each outing, he grew more interested in selecting Hoag for his treatment.

“Each time I’d drive past it, I’d think, ‘They’re really making a commitment to this area,” Chuck said. “I decided to look into what was available.

“I liked what I read and heard.”

“She was enthusiastic, friendly, easy to understand and caring,” Chuck said. “Sandy was instrumental in me starting at Hoag. She arranged for me to see a couple of people and set up appointments with Dr. Robert Torrey, a surgeon and urologist, and Dr. Greg Angstreich, an oncologist. Dr. Torrey’s attitude toward what I was facing, plus his assurances of taking care of me, made me and my wife feel so comforted to get through it.”

Dr. Torrey, who is highly trained in robotic-assisted surgery and also suggested a complete removal of the bladder, provided a great deal of comfort, Chuck said.

Dr. Angstreich recommended 12 weeks of chemotherapy. With Chuck and his wife hoping to schedule the cancer treatment sessions so they would conclude before their trips, Hoag staff finished them in time for the couple to head to Oregon and see the eclipse, a worldwide event that won’t happen again for another 150 years.

Upon returning home, Chuck went in for the scheduled eight-hour radical cystectomy surgery, performed by Dr. Torrey and his colleague, Dr. Yoshida, Program Director for Hoag’s Urologic Oncology Program. Chuck said the medical staff went above and beyond in providing outstanding, compassionate care.

“Dr. Torrey came by one night at 9:30 p.m. to give me the pathology results,” Chuck said. “He indicated the cancer had not spread past the bladder. I was so impressed he told me that night.”

“I am not sure what Hoag is doing different, but it shows. All of their staff is so caring and beyond qualified. They were constantly focused on my needs and I never felt lost in my cancer journey,” said Chuck. “My wife and I were very concerned about traveling too far for my surgery, chemotherapy, and all the post-surgery treatment. After researching many options, both in and outside of Orange County, we felt such comfort in Hoag’s expertise. They were extremely qualified.”

The level of care didn’t end after his surgery.

Chuck found a monthly support group for ostomy patients where he and former patients check in with each other and discuss and concerns they have. A wound care and ostomy nurse provided helpful information in showing how to wear the external collection bag in different applications.

At his follow-up appointments, both doctors have shared the encouraging news with Chuck that they don’t see any complications.

“Everyone has just been very caring and upbeat – they truly cared about me,” Chuck said. “The nurses at the chemotherapy infusion center in Irvine were just excellent. Even the pharmacist came out to say, ‘Hi’ to me and check on me. Everyone was just so very nice.”

Today, the father of two sons and grandfather to five grandchildren, finds himself traveling again with his wife, visiting their family.

“I feel so grateful,” Chuck said. “Life is pretty much back to normal.”